September 21, 2017
A recent incident in July 2017 that involved alleged data theft through a KYC app has added to the confusion and concerns in the minds of users about security and confidentiality of their biometrics and other PII data that are maintained by UIDAI. I am a bit skeptical about how PII is handled by various agencies who collect and transact with such data in our country. The concern about having my biometrics and other data lifted was at back of my mind when I was giving my fingerprint at a mobile phone shop for taking a new data connection last week.

It was not until a friend asked me for some clarifications about internals of biometrics based authentication systems that I paid close attention to various possible leakage points in Aadhaar based eKYC/authentication applications.

The overall architecture and process steps involved when using Aadhaar APIs for performing, say, authentication of an Aadhaar card holder are explained in its API documentation. For the sake of understanding possible data leakage points, a simplified diagram of the system is shown below in Fig. 1.

Although the UIDAI has made it mandatory to get biometrics sensor devices certified, and have incorporated variety of fraud prevention and detection measures, still in my view it is difficult to completely prevent the leakage of sensitive data especially at the Point of Sale (POS) applications. Two most vulnerable leakage points are:
Of course, carrying out such PII theft often involves the personnel operating the POS devices (e.g. at a bank or a mobile phone shop) to authenticate end users seeking some service. Nevertheless, I'm of the view that the threat of PII and biometrics theft is definitely there and is not difficult to carry out for the motivated.

What should/can be done to prevent such PII/biometrics thefts is a natural question that arises. I will write my thoughts on this in a future post.

Meanwhile, UIDAI on its part does one useful thing: whenever someone performs an operation (e.g. authentication) using an Aadhaar number and biometrics UIDAI system sends an alert (see a real sample below) on the registered email ID and phone number of Aadhaar card holder about the operation. A user can then take suitable action in case such operation was done without his/her knowledge. Therefore, it is important to maintain your correct mobile phone number and email address with UIDAI. Now, if your registered email and phone number also have been compromised then you may not have much chance to take any timely action for dealing with your stolen identity. 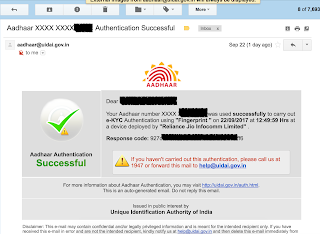 Fig. 2 (An alert email message from UIDAI sent on a successful Aadhaar authentication.)

**Some parts of Fig. 1 are taken Google image search results.

During FY 2014-15 the extramural R&D support expenditure reported by DST's annual report[1] is about INR 20 billion (i.e. 2000 crore). The allocation[2] to DST for funding R&D in 2015-16 was at about INR 95 billion. This is all taxpayer's money. It is not necessarily a bad thing to spend on such R&D as long as the outcomes are useful and accessible to public whose tax rupees are used to fund such "research". One of the key outcomes (at least from the perspective of researchers and the organisations engaged in such "research") is the research articles that are published in various peer-reviewed journals and conferences etc. Examples  of such venues are Elsevier , Springer , IEEE , ACM and so on. If you try accessing a non-open-access article at any of such venues you will find that on an average onetime accessing of a single article can cost anywhere between 15 to 30 USD. Cost of annual subscriptions alone of these journals and digital lib
Read more